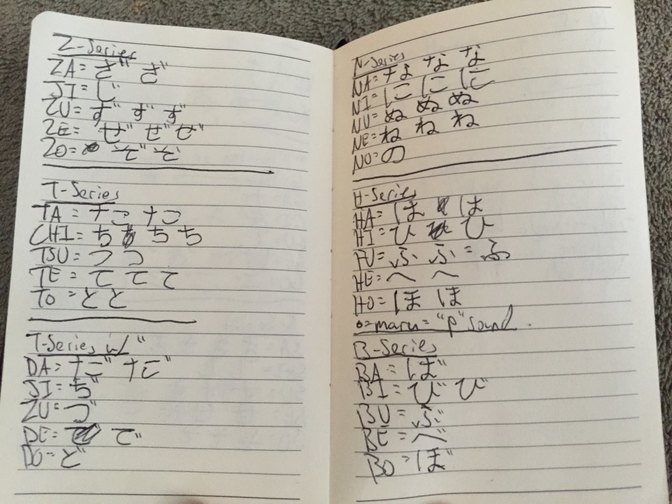 Such was my way of celebrating after I successfully completed writing the first half of the Hiragana syllabary in the Japanese language. Yes, I realize that’s like celebrating writing A – M in the English alphabet, but life is about the small victories, right? Now two weeks into my experiment of learning Japanese for an upcoming tour through the land of the rising sun, I can point at a select number of objects and declare with modest confidence that they exist as well as ask people how they are and respond in kind — so long as they ask me in the specific way I learned.Learning Japanese has easily been my most difficult linguistic challenge to date. For Spanish, there were no shortage of avenues for learning. Between language apps, television, films and the fact that it’s easily the second-most spoken language in the United States — and growing at an incredible rate — Spanish came with comparatively minor scrapes along the linguistic trail. Not to mention spending a year in Central America helped quite a bit.

When I switched to German, I was faced with a third gender (neuter) and remembering to throw my verbs at the end of sentences. As hard as we tend to think German is as a language, they’re at least based off the same alphabet and is historically linked to English. Much of basic German is just silly sounding English. “Das ist gut!”

I still struggle greatly with German, but it’s nothing compared to learning a completely new alphabet.

My journey into Japanese started with the program Human Japanese, mixing culture with language learning. So rather than just being told, “this is the sound these shapes make and this is what it means,” you get some history on the language, how it’s evolved and even some tricks that for a brief moment of bliss make Japanese seem easier than English. That said, I still find myself struggling to remember with any kind of speed what each character makes and I haven’t even touched the Chinese characters that exist in the Japanese language — those linguistic behemoths that resemble art more than language to our latin alphabet eyes.

To supplement my Human Japanese, I’ve gone back to MindSnacks — my very first language app when I first took on Spanish a couple of years ago. Not much exists in the way of fun language learning apps when it comes to Japanese. With Spanish, German and French I was (and am) able to rely on a variety of apps, podcasts and the like. In Japanese, unless I’m missing something, there’s not much out there when it comes to making language learning fun and it was the mundane, textbook style of learning that turned me off of languages back in high school. I couldn’t stay awake long enough to make it to future tenses.

I also just equipped myself with another edition of Lonely Planet’s phrasebook series, the very same I used when I first moved to Costa Rica and when I went to Germany. I’ll go to it more often once I’m on the ground in Japan, but for now it’s mostly useful for grabbing a quick phrase or two to spit out at my very patient wife.

“Nope, didn’t wake up with the ability to understand Japanese, but thanks for the thought!”

I’ll be in Japan in less than a month and I’m surprised by how much I’m enjoying learning what little of the language I’ll be able to grasp before my flight. Honestly, I’d be thrilled if I could study this stuff full-time up to my departure. Alas, I’ll have to suffice with whatever collection of broken sentences and mispronounced words I can fit into my skull.

*There’s a myth floating around that The Vapors classic “Turning Japanese” was in reference to, well, let’s just say the official sport of any teenager who just hit puberty. Turns out it’s just that — a myth. They explained it all themselves in an exclusive with Wikipedia. Just wanted to clarify that I wasn’t gleefully referencing a vaguely racist song.