That Time A Bike Crash Ended A Book 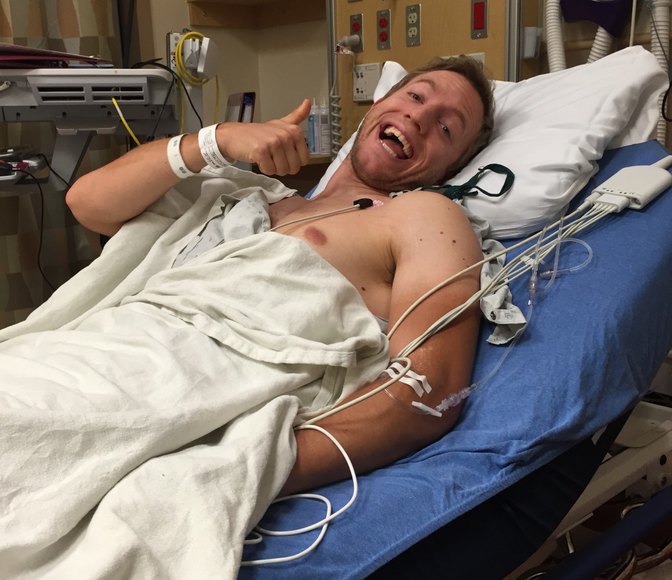 In less than a second, my month of adventure in the Twin Cities came to an abrupt end last Saturday. I just didn’t know it for a few days.

First I feel I should note that this all ironically took place the day after I got hit by a car, a shaking event that I ultimately seemed to walk away from unscathed. I was at Battle Creek Regional Park just outside of Saint Paul for the second in two mountain bike routes that I had been covering for Best Adventures Near Minneapolis and St. Paul. The first was nearby Carver Lake after picking up an El Mariachi mountain bike by Salsa Cycles at Angry Catfish. It was my first time on a mountain bike in years, so I knew I wanted to start slow and steady on a couple of flat pedals as opposed to killing myself on clips. My guide was a former competitor and an absurdly knowledgeable member of the Minnesota Off-Road Cyclists non-profit that is responsible for the creation and ongoing maintenance of the region’s impressive mountain biking trails.

The day was perfect for getting out on the trails. Both parks were quiet with rider traffic, allowing me all the time in the world to coast along the route or even walk when faced with an obstacle that far outmatched my admittedly very limited abilities on a mountain bike. Carver Lake came and went with just a couple of shin bruises from the flat pedals, but I generally manage to smash my shins to pieces on just about any flat pedal bike on any surface. It wasn’t any indication for what was about to come.

After a quick lunch break, we continued over to Battle Creek. Reviews called it an advanced trail, best ridden with someone who knows how to connect the trails. I’ll admit I was a bit skeptical as to whether or not this should be my second ride in over two years, but that October book deadline was looming and I needed to take advantage of every moment I had outside. I told myself I’d take it slow, walking any and all obstacles that seemed to hint at a crash. My guide even joked, “It’s probably not worth it considering how much you have to do,” when we approached questionable obstacles that I maybe would’ve gotten through relatively unscathed. I even had the thought running in my head throughout the day, “Don’t do anything stupid that fucks with this book, South Dakota or Colombia.”*

As you may have guessed at this point, I did something stupid.

We had just taken a small break at the top of a hill. My plan was to snap a couple pictures of my host taking the downhill for the book before walking my bike down. We were at a rocky descent that I knew I had no business trying. As it flattened out, I hopped on my bike and was managing fairly well. I remember seeing a bridge up ahead with a somewhat narrow exit between trees.

“Should I walk it?” I wondered to myself. “Nah, I can’t walk every freaking obstacle.”

Seconds later, I was on my back screaming a hoarse “Shit!” from the back of my throat, experiencing some of the worse pain I had ever felt.

Replaying the moment in slow-motion, it would seem that a tree on my left side hit the handlebar, immediately snapping them to the side, hitting me perfectly just above my groin before sending me to the ground, a defeated and broken man.

My leg felt dead. Over the next 10 to 20 minutes, my leg slowly regained life to the point I was able to hobble back and get a ride home. There was a bruise that I iced and a hot shower made me feel indescribably better. But when I went for a walk, the major muscles of my left leg (glute, quad and calf) felt like I was on my way to my 100th squat rep when I should have stopped 50 reps ago. They were tired and incredibly tight.

Unfortunately over the next couple of days, I didn’t feel I was improving as fast as I should have been. So I scheduled a doctor’s appointment at which I noticed for the first time that my left foot was a lighter color than my right. Granted my skin color can already be generously described as “Printing Paper White,” but this was a worrying sign that warranted sending me immediately to the emergency room. Apparently my foot may have been in danger of needing amputation if I kept waiting. Oops.

The diagnosis was arterial damage that restricted blood flow and therefore oxygen to my left leg, most notably my left foot which had a pulse resembling a sleeping kitten’s pur. Only my situation was hardly adorable.

Surgery and a comforting wife came the next day, Wednesday of last week, and it was apparently a great success. Unfortunately it came with the general precaution that I cannot lift more than 10 pounds for the next six weeks. They left some wiggle room based on how I recover, but the safest bet was to cancel the rest of my planned activities for the book, South Dakota and Colombia. Suffice it to say, I was kicking myself, albeit very slowly, because I just had a small camera and medical equipment surfing around my lower body.

Now I’m back in Cleveland, licking my wounds, and turning my attention back to other travel projects that had previously been put on hold. This means video and editorial coverage of North Dakota, Pittsburgh, Chile, more from Peru and Guatemala, and of course Costa Rica amongst other things. One of those things I can mention is a hopeful return to FacticiousAds, a parody series my brother and I had been working on over a year ago that primarily targeted the ridiculousness of car commercials. That project received a day of fame when Popular Science shared our foul-mouthed polar bear mocking a Nissan Leaf commercial.**

Thanks again to my brother and cuñada*** for canceling an enjoyable week away at a lake house to deliver me a burrito in my time in need, my wife for flying out and making sure I got back home in one piece (which was apparently originally a concern), and to you for tuning in. Now here’s a picture of me being raised in bed with a claw-like hand.

*At the end of the month, I was supposed to go out to the Black Hills of South Dakota to cover hiking and cycling in the area, followed by a two-week cycling trip in Colombia with Exodus Travels. Both now postponed at my great annoyance.

**Though they inexplicably credited “Crowdsourced Advertising,” I promise it really was us.

***Cuñada is “sister-in-law” in Spanish, which I prefer over the implicit legal formality of the English term.

What You Need to Know About Riding the German Train System

How Irish Buses And Trains Kicked My Ass

Welcome to Without A Path, the place for all things off the beaten path food, travel, and experiences around the globe. I'm Joe Baur, a Northeast Ohio-born, Berlin-based travel author (Talking Tico), filmmaker, podcaster, and photographer, sharing my experiences and moderately humorous musings from Rome to El Salvador. When I'm not writing here, you can find my work with BBC Travel, Serious Eats, Food52, Trail Runner Magazine, and more at joebaur.com.

Have questions? Send an email. Otherwise, sign up for my newsletter and happy scrolling.